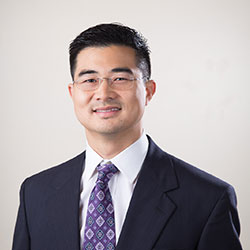 Dr. Fung has been in practice since 2012 in the San Fernando Valley. He specializes in endovascular interventions for aortic, peripheral vascular disease, and venous pathology. He is born and raised in West Los Angeles and Encino, however, spent much of his training on the East Coast at schools such as Phillips Exeter Academy, University of Pennsylvania, and New York Medical College. As well as graduating magna cum laude from UPenn, he was also inducted into Phi beta kappa. He is well certified by the American College of Surgeons as well as a registered physician for vascular ultrasound interpretation. He holds privileges at most of the hospitals in the San Fernando and Santa Clarita Valleys including West Hills, Providence Holy Cross, Providence Tarzana, Providence St. Joseph's, Valley Presbyterian, Dignity Health Northridge, and Henry Mayo Hospitals. He currently has three young children and his wife is also a physician in the Kaiser hospital system.


Fellowship in Vascular and Endovascular Surgery:

Loma Linda U and Affil Hosps